Setting Mindball up is simple and quick. The entire process, from opening the case to playing the first game, should take 10 minutes or less. Once you have turned the power on, the game sets itself automatically within 90 seconds. You do NOT need a separate computer to operate Mindball, there is no software to install and no programming required. 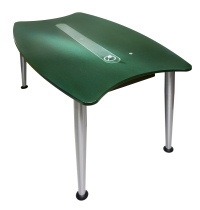 The game can be dry hired, but for the best results we recommend the services of a professional host. Your host will not only look after the gameplay and explanations of the underlying technology, but will also assist with attracting visitors to your stand, qualifying them and steering interested parties to your sales team.

Beyond space (approx. 2m x 1m) for the Mindball table, the only other requirements are a monitor (any with a VGA connector) and a power supply (2  standard 13A three pin (UK style) sockets (1 for Mindball and 1 for the monitor).

How do you play a game?

The game is activated by the silver button on the table surface. Pressing the button moves the ball automatically to the centre spot. There is no need to move the ball yourself – the game deals with centring automatically. Once the ball reaches the centre the game begins and from now on each player must try and remain as calm, composed and focussed as possible and should try and avoid speaking, laughter and sudden movements.

Who is the winner?

Each player tries to move the ball to the opposite end of the table and to score a goal in her/his opponent’s goal.

A game can last from a few seconds to several minutes, depending on how well matched the opponents are. Once players have had a few games they will usually become better and better at it – making the games more evenly matched and therefore longer.

Can we run Mindball as a tournament?

Absolutely! There are various ways to do this. “Winner stays on” is a simple and popular method, but remember that the winning player (who has already composed her/himself) usually has a huge advantage over the challenger. Other methods include awarding points for every game won, with a maximum number of games per person. Or setting a time limit of 2 minutes per game (or even 1 minute in very busy periods), with the winner being the player who has the ball furthest towards the opponent’s goal.

Is there a technique for playing Mindball?

Each player usually finds a technique that works for her/him. Focussing intently on the ball is popular. Some players use visualisation techniques or other methods of focussing such as mathematical exercises, meditation, etc.

What is actually happening during a game of Mindball?

The headbands detect the level and type of electrical activity (measured in Hz) in the frontal cortex of the brain and feed this information to a computer that analyses the data into different wave bands (these bands are explained here). The computer is programmed to reward the player who has the lower (i.e. calmer, more focussed) brain frequencies and moves the ball accordingly.