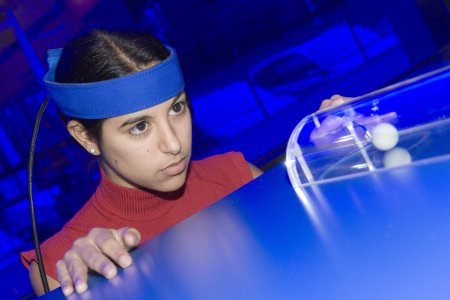 Controlling devices with the mind sounds like science fiction but it is based on real science and technology that is available today. Perhaps you heard about or visited the London Science Museum exhibition (NEURObotics…the future of thinking?) that showed the advances in this area and where Mindball was one of the star attractions?

Mindball is based on a technology called EEG (electroencephalography) feedback. This involves monitoring the level of electrical activity in the brain and showing the resulting graph (or other output) to the person being monitored. It’s the brain equivalent of a cardiogram. This monitoring with Mindball uses a simple, velcro-fastened headband.

The principle of EEG in humans was first demonstrated in 1924 by Prof. Hans Berger working at the University of Jena in Germany. Berger was the first to describe the different waves or rhythms present in the brain, such as the alpha wave rhythm (8-12 Hertz, or cycles per second), also known as Berger’s wave.

Further work on the role of alpha waves in reducing anxiety and promoting relaxation took place in the 1960s, and the concept was popularised by Joe Kamiya in an article published in Psychology Today in 1968. Kamiya’s experiment demonstrated that using feedback it is possible to recognise the alpha state and, for some people, to enter that state on command. Later work by Joel F. Lubar showed that EEG feedback can be an important tool in helping with attention disorders.