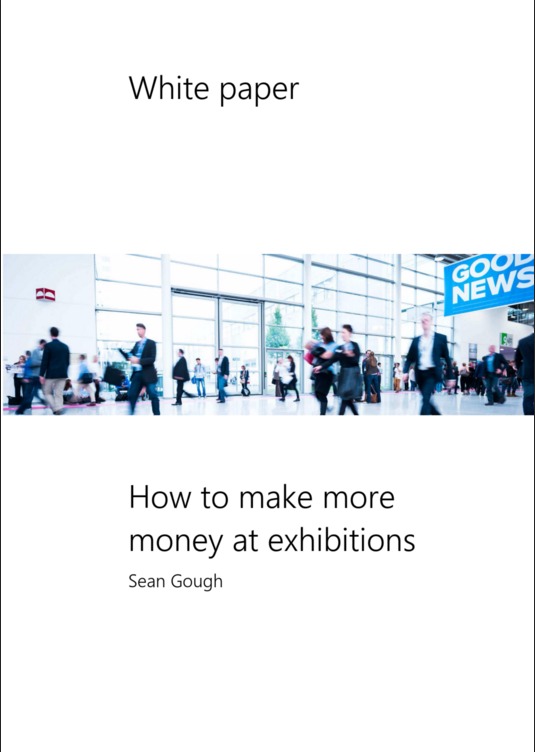 Are you sceptical about the return on investment from exhibitions, or face to face marketing generally?

Perhaps you should be – there is good reason to think that the cost of a new customer unearthed at an exhibition is nearly £2,500. It sounds a lot, but a review of the available evidence I conducted this year suggests it is realistic.

When does it make sense to invest this amount and does it have to be this high? Is there something clever, beyond simple cost cutting, that would bring the figure down?

In the absence of any (really, any) published studies about return on investment at UK exhibitions, pretty much anyone discussing ROI quotes a 2009 US survey by the Center for Exhibition Industry Research (CEIR). This apparently gives an average cost per lead at shows of $96. Which doesn’t sound too bad, until you read the report itself and find that this figure is not the cost of the lead, but the cost of a subsequent face to face meeting with that lead.

So back to the drawing board. The only other published average cost per lead that is based on evidence across a range of exhibitors is by Exhibit Surveys (again in the USA and again in 2009) which indicates $280. Converting to Pounds and allowing for inflation that’s £236 per lead.

Do you know the lifetime value of your customer?

If you’re still thinking that’s good value, that’s not the end of it. You still have to convert that lead into a sale. Let’s work a simple example. If an exhibitor can convert 10% of the leads generated at the show (and there is 2015 US survey data that suggests this is a reasonable estimate – see the White Paper request in the right column), then the cost per customer has just ballooned to £2,360. And that’s without factoring in the costs (time, travel, etc.) of conversion.

At what point does it make sense to invest nearly £2,500 to gain a new customer? For some companies it could be screamingly good value. For others it’s going to be the fast lane to a loss. Obviously it all depends on the average lifetime value of a new customer. If you don’t have a pretty good idea of what that is (or what it could be, if you are a new entrant), then you can’t really make a rational decision about whether to exhibit or not.

A Zen moment – looking into the unknowable

It’s at this point that we need to state the existence of the unknowable. Anecdotally at least, marketing people seem to accept that the business case for exhibiting is not just about sales leads. The person you never knew existed but happen to meet at a show could open doors to wholly unexpected new partnerships, channels, countries, products, recruits (to name a few possibilities) that have the potential to transform a business. Q: how do you quantify that in an ROI case? A: Retrospectively.

Is there any sensible way to reduce the cost per lead beyond cutting the major expenses? Yes – if you look at the problem from the opposite direction. As well as asking “how do I cut the cost of attending this exhibition?”, why not also look at how to generate more leads at the show? This tends to get overlooked until the last minute, which is odd as it has the potential for the most dramatic effect on event ROI.

This is where exhibition promotions come in. A good, relevant promotion can have a dramatic effect on the number of people who come to your stand. You can read through the calculations leading to this in my new white paper, but the bottom line is, with the right promotion, you can reasonably expect to increase traffic to your stand by 30% and reduce the overall cost per lead by 13.5% (from £236 to £208). Even more startling, the cost per incremental lead (those you created by virtue of the promotion) would be just £22, a reduction of 91%.

How to start an intelligent conversation

One last stat. In 2014 Exhibit Surveys produced a report that says over half of the people who make it on to a stand never have a conversation with the exhibitor at all. Shockingly I am not shocked by that figure.

If someone comes to your stand for a free pen, they are probably going to take it and walk away, leaving you with just a name in a database and no real idea of whether they are a qualified lead or not. Someone from your team has to engage them in a conversation and make intelligent use of what they learn. Many promotions fail because they do not keep the visitor on the stand long enough to have that engagement.

So what does a good promo look like? Ask yourself whether it will perform these tasks:

If you can plan your promotion with these tasks in mind, then you have every reason to expect a 30% increase in visitor numbers, a reduction in overall cost per lead of 15% and a reduction in the cost of incremental leads of 91%.

This blog post is based on a white paper prepared by Sean Gough for Mindball. www.mindball.co.uk